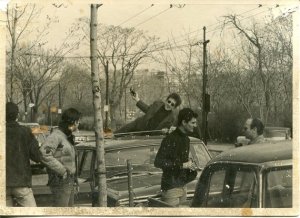 Bob Dylan on a car roof on Mount Auburn St., Cambridge?  Who was fortunate enough to get this 1963 shot?  It was Betsy Minot Siggins (credit for photo), freshman roommate of Joan Baez at B.U. and a manager of Club 47 in Harvard Square who today has it in her assembled collection called the New England Folk Archives.

“I was into folk music a little early,” Siggins said in an interview for examiner.com. “I was a high school sophomore, and The Weavers were getting heard on the radio. There were the Everly Brothers, with a hint of R&B. I also overdosed on Gilbert and Sullivan as a teenager.”

Siggins and Baez were both more into music than academics which prompted Siggins to waitress at the Cafe Yana, a tiny basement club off the B.U. campus on Brookline Ave.

She met and eventually married to Bob Siggins of the Charles River Valley Boys. After a year touring overseas with the band, the couple returned to Cambridge where Club 47 became Betsy Siggins’ employer and favorite hang. She was said to have made herself indispensable to the legendary venue. 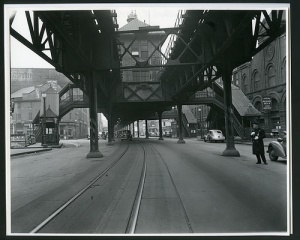 Rowe’s Wharf is, without doubt, one of the most beautiful developments on Boston’s waterfront. With its highly visible arch that connects Atlantic Ave to the harbor itself, it has become a landmark against which you can judge your placement in relation to other points of interest. Should you walk through that majestic archway, you can find a marina, restaurants, a water transportation terminal, and a floating stage offering free concerts and movies during the summer. You can take a ferry to Hingham or a water taxi to Logan. It is a strong addition to the New Boston.

But is it really an addition? When the Boston, Revere Beach, and Lynn Railroad was built in 1875, a ferry connector to the Railroad’s southern terminal in East Boston was established at Rowe’s Wharf. Then, when the nation’s first subway system was constructed in 1901, a stop on the Atlantic Ave elevated tracks was created at Rowe’s Wharf, connecting the wharf to the city-at-large. Boston was then a major East Coast port and point of trade.

However, for reasons unclear to this blogster, by mid-century, Boston had lost much of its lustre as a viable port of call. The railroad to Lynn closed, the Atlantic Ave elevated closed, and Rowe’s Wharf was left to twist in the water, weather and wind, causing it and the surrounding area to quickly fall into delapidation. Perhaps New York had left us capsized. In any event, our major point of entry from the Atlantic became irrelevant and seemingly was lost to time.

With the exception of Harbor Towers, considered heretical at the time of their construction in the early 70s, nothing much happened on the waterfront for nearly 40 years. The city’s connection had been sliced off by the behemoth known as the Central Artery in 1959. Rowe’s Wharf was slip sliding away. It wasn’t to get its new lease on life until plans for the Big Dig were finalized. This would give the Boston Waterfront its rebirth and visitors to the city a reason to see why Rowe’s Wharf should be called the Hub of The Hub. Too bad you can’t take an old trolley car up and down Atlantic Ave and have a new stop at Rowe’s Wharf Station…..Jim Botticelli 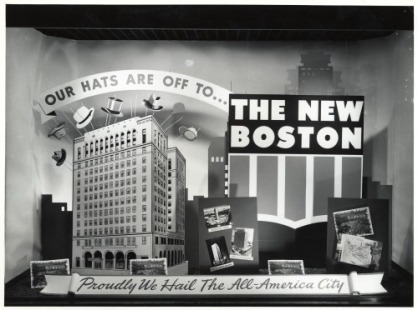 As Mayor Tom Menino made his final journey to Most Precious Blood Church on Maple St. in his hometown of Hyde Park, the contrast between the New Boston and the Old Boston got another 15 minutes of fame. The Urban Mechanic–an Old Boston guy if ever there was one–straddled both. So well in fact that he earned enough political capital to reign for 20 years. Were it not for health challenges he may have won another term. Such was Tommy’s gift.

The New Boston is now new. And Old Boston is still here. That dichotomy has become evident as reflections abound about the meaning of Tom Menino’s Mayoral service. A quick primer. New Boston was conceived back in the 50s and 60s as Boston became a property tax swamp which drained the city of hundreds of thousands of residents from the city’s population. John Collins won an unexpected victory in 1959, and by the early 60s was cutting taxes and services. He brought in Ed Logue to front the controversial Boston Redevelopment Authority and focused on Downtown Development. Think Scollay Square, West End, Allston, Roxbury, South End. But John Collins ignored the neighborhoods and that was his downfall.

Collins mangled what Menino finessed with aplomb. Menino knew there was no turning back from downtown development. It was well underway before Ray Flynn got the Vatican Ambassadorship following his support of Clinton. What Tommy got intrinsically was that it was the people of Boston, not the corporate interests, that he had to communicate with. That was his ticket. The voters served him as he served the voters. There may have been deals cut behind closed doors. How could there not be? Corporations are people too! But Tom Menino ultimately will be remembered as the mayor who could communicate with and serve Boston’s voters. For a guy they called Mumbles, this has become astonishlingly clear. Disproving the axiom that it ain’t what you say. It’s how you say it. For Mayor Menino it was what he said. Rest in peace Thomas Menino. (Photos courtesy of City of Boston Archives)