As Mayor Tom Menino made his final journey to Most Precious Blood Church on Maple St. in his hometown of Hyde Park, the contrast between the New Boston and the Old Boston got another 15 minutes of fame. The Urban Mechanic–an Old Boston guy if ever there was one–straddled both. So well in fact that he earned enough political capital to reign for 20 years. Were it not for health challenges he may have won another term. Such was Tommy’s gift. 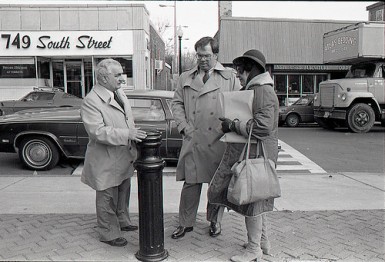 The New Boston is now new. And Old Boston is still here. That dichotomy has become evident as reflections abound about the meaning of Tom Menino’s Mayoral service. A quick primer. New Boston was conceived back in the 50s and 60s as Boston became a property tax swamp which drained the city of hundreds of thousands of residents from the city’s population. John Collins won an unexpected victory in 1959, and by the early 60s was cutting taxes and services. He brought in Ed Logue to front the controversial Boston Redevelopment Authority and focused on Downtown Development. Think Scollay Square, West End, Allston, Roxbury, South End. But John Collins ignored the neighborhoods and that was his downfall.

Collins mangled what Menino finessed with aplomb. Menino knew there was no turning back from downtown development. It was well underway before Ray Flynn got the Vatican Ambassadorship following his support of Clinton. What Tommy got intrinsically was that it was the people of Boston, not the corporate interests, that he had to communicate with. That was his ticket. The voters served him as he served the voters. There may have been deals cut behind closed doors. How could there not be? Corporations are people too! But Tom Menino ultimately will be remembered as the mayor who could communicate with and serve Boston’s voters. For a guy they called Mumbles, this has become astonishlingly clear. Disproving the axiom that it ain’t what you say. It’s how you say it. For Mayor Menino it was what he said. Rest in peace Thomas Menino. (Photos courtesy of City of Boston Archives)

What's on your mind? Cancel reply